How Cooking in the Instant Pot Changed Everything

Health Parenting Preservation Pressure Cooking Urban Farming
Confession: I have only used my stovetop once in the last two weeks. My oven, likewise, only once. It's summer, and no one wants to heat up their kitchen on these hot days. But we have not been eating out, not even once. We haven't been living on cold snack food. I have been cooking each day-- what's more, I have been thrilled to cook each day-- in my Instant Pot. 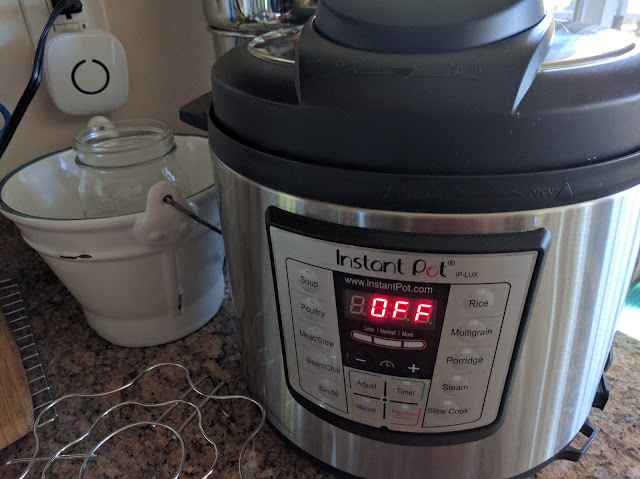 The Instant Pot is heavily insulated so it stays cool to the touch (except on the metal parts of the lid!) It can cook long and slow, like a crock pot, or intense and fast, using the pressure cooker function. It can also saute, steam, and bake (and even make yogurt if you get the 7-in-1 model). You can use it instead of the microwave to reheat leftovers in a dish on a trivet, while cooking something else in the pot below.

Until very recently I considered myself to have a bit of a phobia of pressure cookers. The old style stove top pressure cooker is a little frightening, and we've all heard horror stories of them exploding for various reasons. The Instant Pot has many safety features, including a lock on the lid that will not release until the pressure has abated. You could certainly burn yourself on the steam valve when releasing pressure, but it's quite safe to just use a hand towel and push the lever to release, making sure there is a clearance above the pot for the fountain of steam that will issue forth. It can be a bit surprising the first time, but I quickly got the hang of it.

Besides not heating up the kitchen, and the ability to cook foods rather more quickly than normal because of the use of high pressure, the Instant Pot saves energy! It plugs in, and since it's highly insulated, all the energy it uses goes right into cooking your food, rather than heating your kitchen. I have read that it uses only 30% of the energy of cooking in a conventional stove or oven. I can get behind that kind of energy savings.

Also, one incredible advantage for busy families is that the Instant Pot can handle frozen chunks of meat. So if you forgot to take something out of the freezer to thaw for dinner, no worries! Just plop it in with some liquid and look up how long it needs to cook under pressure (based on how large the frozen chunks are) and let it do its thing. I know veggies retain more nutritional value and better textural integrity if cooked from frozen rather than being allowed to thaw first. This might be true for meat as well, though I don't yet have enough experience with it to know.

I think of myself as a pretty good cook, but I think it sometimes kind of takes a love of healthy food to really appreciate my cooking. If you know what I mean. But everyone in my family has professed their LOVE of my Instant Pot, because my cooking is getting really amazing results. And I love it because all I have to do is throw stuff in the pot, push a couple of buttons, and forget about it! It's exciting to see how things turn out, and they are always good.

My son lives for mashed potatoes, and so the first thing I made with the iPot was a batch of very simple, two ingredient mashed potatoes. Just yellow potatoes, skin on, and sea salt (cooked in a bit of water that I mashed right in, no steaming liquid to dump!) They turned out SO good, so tasty and perfect, he declared them my best mashed potatoes ever. And it was easier than ever. What's more, pressure cooking turns the relatively unhealthy potato starches into GOOD for you starches that actually help to lower cholesterol, according to this article. So now, not only are they easier, but I feel good about feeding my family mashed potatoes regularly, rather than just as a holiday treat.

Everything I have tried cooking in the Instant Pot has been amazing, from masala chicken with kelp noodles to hard boiled eggs that are incredibly easy to peel; from cinnamon apple oatmeal to beef short ribs and stuffed mushrooms. I am loving this thing, and it has certainly paid for itself a couple of times over, since we normally eat at a restaurant about twice a week, and haven't even wanted to since I've been cooking in the Instant Pot. It's thrilling.

There are places I haven't gone with my iPot. There is a world of baking you can do in them. People profess that it makes killer cheesecakes, banana breads, cinnamon rolls, etc. Things like this bake nicely without drying out as they would in a standard oven, because you bake them on a trivet over a small amount of water. I am looking forward to experimenting with baking in the Instant Pot for sure! 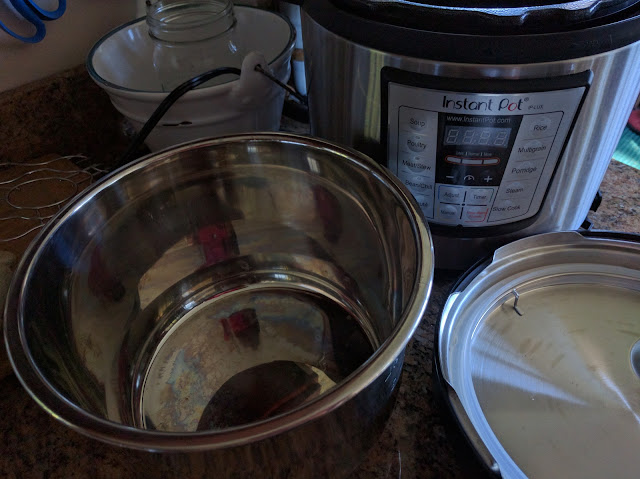 The cleanup is generally a breeze, since everything is done in one easy to wash stainless steel liner. There was one thing I made that stuck to the bottom of the pan: spaghetti with meatballs, made from gluten free corn noodles. I have since learned that GF noodles tend to stick more, and the pot should be oiled next time. But how awesome is it that you can make a whole spaghetti dinner in one pot? Just toss in noodles, a small amount of water, sauce, and any meat or veggies. I was using frozen meatballs, but the meat can be sauteed right in the Instant Pot before pressure cooking.

There are LOADS of Instant Pot recipes available online, as well as dedicated Instant Pot cookbooks available at the library. You can be sure I will be posting my favorites! I find that once you get the basics, it's very easy to experiment and modify just about any recipe so that it works in the IP.

Please check out the following links if you're interested- any purchases made through my link help support our family. Thanks in advance!

How Cooking in the Instant Pot Changed Everything
4/ 5
Oleh Mellow
Mellow July 28, 2016 2 Comment

Thanks for sharing your experience with an electric pressure cooker. I have one and I love using it! Meat comes out so tender. Blessings,Janet

You have my curiosity with this device miss! I'm going to look into getting one for my house!
Thanks for joining Peace, Love, Linkup! Come and grab a button and I'll see you tomorrow at 6 for more sharing hijinks!