Load more
You are here : Home / Health / Remedies / What I Learned About Septum Piercings From Almost Failing At It Twice

Do your research. When I pierced my septum the fist time, I had wanted to have it pierced for a very long time, but I decided to do it on a whim, with a "now or never" attitude. Unfortunately, I happened to be passing a piercing shop at the mall when I decided this. So, instead of going with a recommended piercer with a good reputation, I went with whoever was on shift at the mall shop. I tried to ask questions of the girl working the front counter, but she was very unhelpful and assured me the piercer would tell me everything. I was nervous and excited.

The piercing itself was quick and painful, but then it was done. The piercer gave me a photocopy of instructions for care, and told me I could switch out the jewelry in 4 weeks. The paper said 4-8 weeks, so I conservatively waited 5 weeks to switch from the rather large ring he used to a smaller one that I felt fitted my face more.

I couldn't get it in. Even though the new jewelry was smaller, and I had waited even longer than he had told me, my piercing was effectively gone. I cried. I went into the shop later that day; the same piercer was working. He couldn't get it in either, and assured me that it was my fault. I cried again. The crying didn't help, but I had loved finally having my septum pierced, even with the too-large jewelry. Just like that, and after all my weeks of careful care, I had no more lovely septum ring.

When I decided to get it repierced, a long year and a half later, I asked friends for recommendations. I had gone into two local tattoo shops, but wasn't sure how to judge about the quality of care and the pride in their work, based on their art portfolios. When several friends recommended a piercer at a tattoo shop a few miles down the road, I sent the shop a facebook message. I explained that I had scar tissue from a previous septum piercing, and was nervous about the whole thing. We messaged back and forth a bit. She assured me that she could definitely help me out. She was very knowledgeable, and easily answered my questions, providing all kinds of information about jewelry types, problems and issues during healing, and told me to wait a full 8 weeks before switching out the ring.

The second time piercing the same spot was a lot more painful. It seemed like the scar tissue got in the way. But after a brief struggle and a few screams from what almost felt like birth pains, it was done. I had my new baby nose ring. To be safe, I waited 4 months before changing it out for a smaller ring. No need to rush.

Cotton swabs are your friend. You will use them to clean around the piercing, to get crust off the ring, and even to wipe your nose since you cannot use anything else. My nose was very sensitive, and took a long time to heal, especially the second time. I cleaned it and applied virgin coconut oil three times a day, making sure the ring could spin freely each time. Coconut oil was my idea, and I chose it because it has antibacterial properties. My second piercer had recommended against using petroleum products like Vaseline.

My first peircer had just tried to sell me a packaged After Care solution (salt water). Instead of buying a bottle of salt water, I made my own saline solution fresh each time, with a bit of warm water and salt in my neti pot. Using a neti pot with a septum ring is a bit more challenging than I was used to, especially during the first couple months of acute healing. The spout will basically not form a tight seal inside the nostril since there's jewelry through it, but it still works. During the first weeks after piercing, I did not even touch it to my nose, but just used to pot to pour warm salt water around both sides of my piercing. Then I'd clean it with my cotton swab dipped in salt water, and rinse my septum with the neti pot again. Three times a day.

Maintain a Relationship With Your Piercer

A good piercer, like a good tattoo artist, cares about the work they're doing and wants it to be something you're happy with and that looks good in the long run. I have gone back to my piercer (Mary, from Mosely's Tattoo) with questions that came up during healing. I never once felt like my questions were dumb, or my problems a nuissance to her. That relationship ended up being extremely important when, nearly a year after my re-piercing, I tried to switch from a silver hinged ring to a gold hinged ring. They were both the exact same size, just different colors. I've been into gold lately, and was excited about trying something different than my standard silver jewelry. That's when I almost lost my piercing for the second time.

My nose had originally been pierced with a circular barbell, a massive thing that didn't fit my face. Mary had preferred to use a captive bead ring, which was a little more slender and easier to wear. Both rings had some weight to them because of attached beads, and would swing around as I did yoga or leaned over. This turns out to be important in maintaining a kind of open piercing hole. When I switched my second piercing to a little "seamless septum clicker" ring, it was so small and light that the only movement it ever got was when I spun it during cleanings. This made the hole become very small and tight, and to my dismay, very nearly lost me my nose ring. 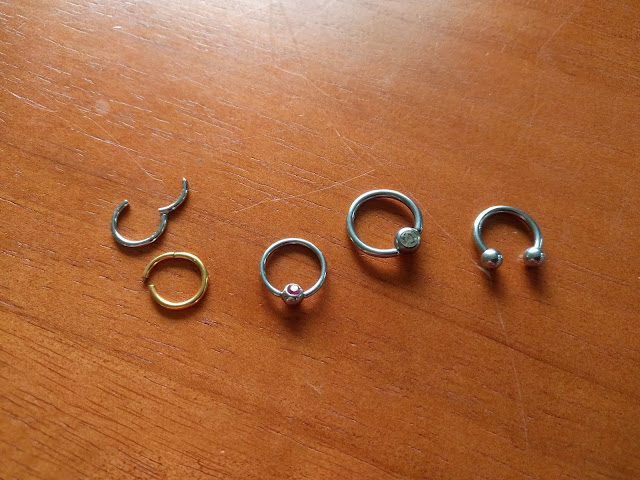 I'd been wanting to change my ring out for a while, and had just been pragmatically giving my nose lots of time to fully heal before messing with it again. It had been almost a year since my second piercing. I had read that it can take a year and a half to fully heal a septum piercing, although obviously the jewelry can be switched out before that time. So one morning I was feeling like a go-getter, and I got ready. Getting ready involved me washing my hands and opening the new ring. I did not even clean my septum before changing the ring, which would probably have been a good idea. That ended up not being the problem, however. The hole seemed to just be gone.

I bravely slid the silver ring out, and tried to follow it with the little gold ring. I could get it in a millimeter or two, but after that it stopped dead. I tried from the other direction; same thing. Hands shaking, I took the ring to my boyfriend and he gave it his best. After making it bleed a little, he apologetically gave up too. Before even bringing the ring to him, I had messaged Mary in a panic. She got back to me and assured me it would be fine. Enough time had gone by that the piercing would certainly still be there. I iced my nose, took slow calming breaths, and prepared to go into the shop once they opened. While I waited I practiced some meditation, trying to keep my mind and body from going into stress mode. I don't love pain, and could not bear the thought of going through getting my septum pierced a third time, and the months of tender care that involves.

Because my hole had become so small, it was hard even for a professional to get a ring through. Gamely, she tried to insert my preferred gold ring, multiple times, multiple ways. Eventually, she grabbed a new ring, this one a hinged ring with a straight bar that goes through the septum. She got it in easily. My relief was palpable.

Now my job is to gently wiggle my nose ring frequently, to work the hole a little larger so that it will accept rounded rings and be easier to change out. And I think when I do change it again, I'll go back to the heavier, captive bead ring for a while, to make sure the piercing stays a decent size. Mary says the more often I change it, the easier it will get. For now, I'll go back to her for ring changes, until I'm confident that my piercing is here to stay.

Below are Amazon Affiliate Ads. Any purchase made through them helps support our family, without any additional expense to you. Thanks in advance!

What I Learned About Septum Piercings From Almost Failing At It Twice
4/ 5
Oleh Mellow
Mellow January 29, 2018 Comment