DIY Fermented Gluten Free Health Paleo Preservation Raw Recipes Urban Farming
I've been making my own sauerkraut for years, but for a long time I used a more complex method involving a large crock, the perfect size plate to fit inside it, a heavy jar to weigh it down, and a tea towel over it all. It's really not too hard to set up once you have the right size crock and plate, but in my small kitchen it was annoying to have this large contraption taking up space while it fermented for 3 weeks. Plus, checking the sauerkraut along the way to see if it was done was an involved process each time.

Here is the method I've been using for the past year or two, with great success. It's way easier and quicker, and when the sauerkraut is done it's already in jars, so there's no messy repacking.

I start with about 5 lbs of veggies and 3 Tb of sea salt. I usually use one big head of cabbage, plus a handfull of whatever other veggies I want to try. Things that I've found work great are carrots, celery, beets, daikon radish, kale, and onion. In smaller amounts I add stronger flavored ingredients, like hot peppers, garlic, ginger, oregano, and seaweeds. When adding dried seaweeds, soak them first to rehydrate, and reduce the salt a bit. Variety makes sauerkrauts more interesting, nutritious, and tasty!

Simply chop or shred all veggies and combine with the salt. I mix with my hands to massage in the salt and bruise the veggies a bit, to help them start to break down and release their water.  I wear gloves to protect myself from the sting of hot peppers. You can save spicier additions like peppers and onions to stir in after the salt has been massaged into the other veggies, if you're not protecting yourself with gloves.

After massaging in the salt, let the mixture sit for a few minutes, massage again, and you should notice a lot of liquid has been released. This water (brine) will be added to each jar along with the veggies. It's ready to jar up and start fermenting!

Stuff veggies by the handful into clean, wide mouth mason jars. You will probably need 3 quart jars, or 2 quarts and one pint size jar for 5 lbs of veggies. Press the veggies deeply into the jars, both to bruise the veggies further and to remove any air pockets from the kraut. It's best if the jars are filled just to the "shoulder", about 1" below the top, so that there is room for them to bubble and expand a bit. I frequently overfill them, and liquid seeps out. Which is fine, but I'd rather it stay put.

After pressing the veggies deeply into the jar, top off with the brine. Try to distribute the liquid equally between the jars, with the goal of covering the veggies with brine. Using a spoon or clean hand, press all the kraut as much as possible below the level of the brine. If necessary, extra brine can be mixed up to top off the jars. Simply mix salt and water (about a teaspoon of salt per cup of water) and pour over kraut. I have never needed to do this, because I find the veggies always provided enough liquid on their own. 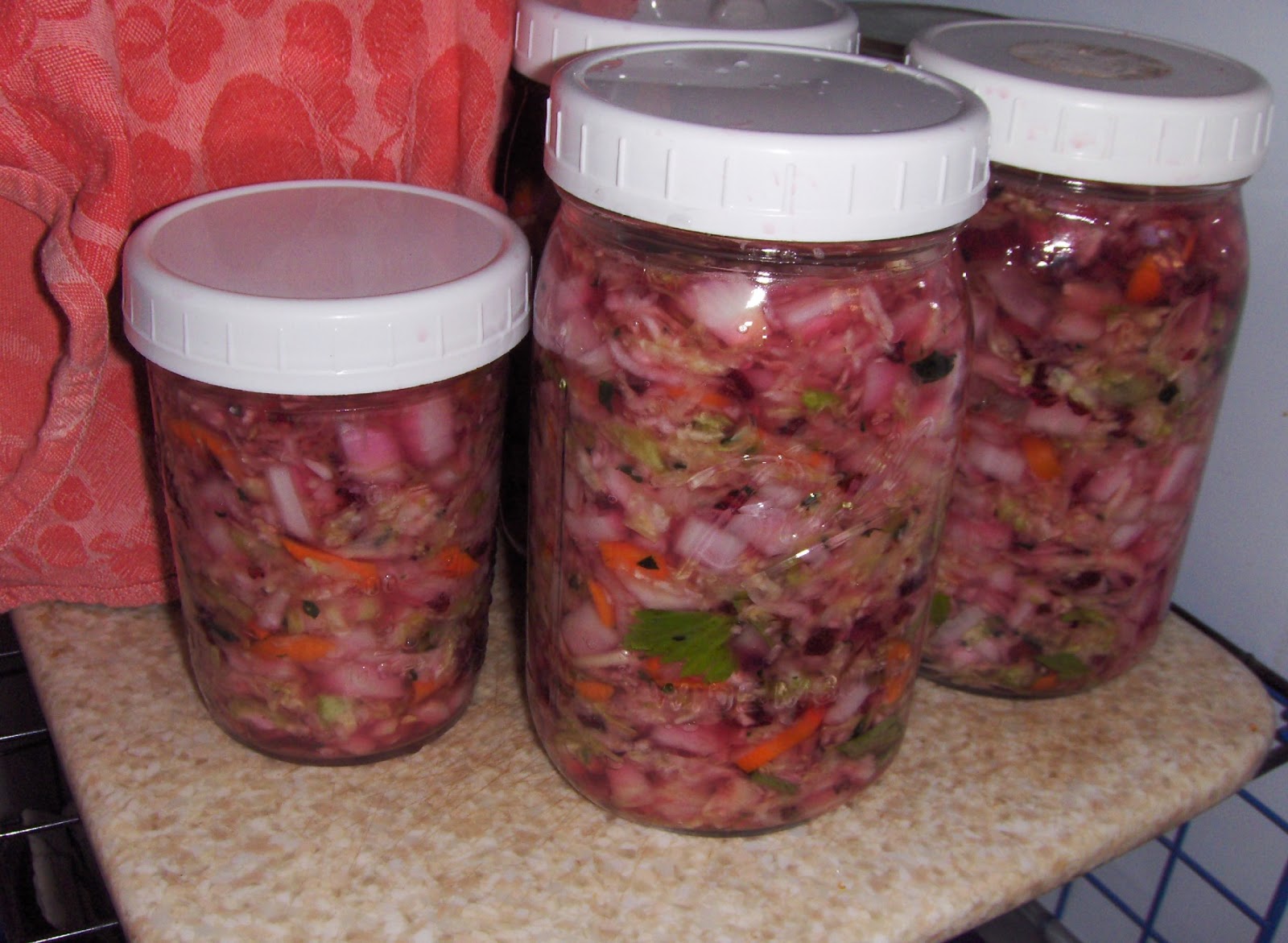 OK, your work is done here. Screw some lids on those jars and let them ferment for anywhere between 1 and 3 weeks! Yes, that is a huge window. It's up to you to decide when they're done. I find it's perfectly good at any point along that continuum; some people like their krauts a little more fresh and crispy, and others like a more mature, softer kraut. For the first few days, fermentation will be very active, and it's best to open the jars enough to release pressure once a day.

Open the jars at least once a week to check for signs of mold (remove any you see with a clean spoon) and press any veggies back under the brine that have strayed. Taste a pinch of veggies each week. Once they're done to your satisfaction, transfer them to the fridge. They'll continue to mature in the fridge, but at a much slower rate. Kraut will last for many, many months under refrigeration. I've even kept it in my cool, dark, garage pantry for about a year and it was still perfectly good.

Sometimes the top layer of the jar will discolor from oxidation; you can discard this layer if you find it unappealing. My chickens gobble up discolored kraut with impunity. An off color does not mean it's gone bad, it's simply oxidized.

For more on the benefits and history of sauerkraut, as well as a whole world of other fermentation ideas, check out the original source of my inspiration, two books by Sandor Katz. Both probably available from your local library, but also definitely worth owning. If you buy either through my ad links below, Amazon gives me a tiny bit of cash. Thanks in advance!

Hey there! I haven't been getting feed updates for you for a while (my roll says 5 months). I had this issue with Blogger a few weeks back with my own blog.

I'm traditionally a cabbage purist but definitely look forward to experimenting with seaweeds, peppers, and oregano (not necessarily all in one batch)! Thanks for sharing these ideas! I might even get started tonight!

What is the salt:water ratio you use? Thanks

I don't add water to my krauts, but if you need to because you don't have enough brine to cover the veggies, you can dissolve a teaspoon of salt in a cup of water.

This looks more manageable than the crock pot method. I too have a very small kitchen and simply no room to store much. I like the variety you add to your cabbage too.

Loving your site, just found it, by way of stinging nettles (everything we needed to know) and now this, sauerkraut recipe and how-to and so much brilliant detail and experience thrown into the mix--THANK YOU

Mellow, would you consider updating your "BLOG LIST" to include my website. We make a lot of the same recipes!

My husband and I just made sauerkraut for the first time using your instructions. We're hooked! Ate half a jar to celebrate July 4th. Thanks for the great info.

This recipe is a great way to end the season and says cheers to a new one.

This is perfect. I wondered how you make your own sauerkraut. Thanks for sharing.

I've never made kraut when the cabbage was cut so thinly! this looks so interesting! It also looks like a great recipe! Definitely going to have to try this one the next time I make some sauerkraut. Thanks so much for sharing! Can't wait to try this at home.